Six Norwegians, some guitars, a drum set, a double bass, a pump organ and several oil barrels, steel rims, trash cans and sirens. Sounds very strange at first glance, but it all fits together perfectly!

There's no common genre in which Kaizers Orchestra's music fits. "Officially" one could characterize the music als "norwegian polka", because there's "ompa" in it, a nordic style of music that would probably be called "polka" here in Germany. But no - the Kaizers music doesn't really have anything to do with that... Kaizers Orchestra themselves call their music "Kaizerrock", I guess they haven't found a proper category either... =;-)
From the traditional part of the instrumentation it is obvious that their music is indeed rock-music. Additionally, the six musicians pound furiously at oil barrels and steel rims, which of course intensifies the rhythm and releases a lot of energy. And that's exactly the special thing about Kaizers: the energy. The musicians give everything on stage, the show is perfect, and the fun and energy spreads to everyone in the audience. But also on CD the music is just spellbinding.

Kaizers Orchestra sing in Norwegian. In fact in a norwegian dialect that is at the beginning even hard to understand for other Norwegians... =;-) Non-Norwegians don't understand anything at first, of course. But it's worth the effort getting the translations, as - like the music - the lyrics are no run-of-the-mill love-songs, but... different. They tell stories, the first albums are mostly about war, revenge, resistance and death, the songs are in part linked to each other. You can find the whole story about the Violeta trilogy here. After some time one learns to know the characters, one finds out why Sven Korner is a villain and why Marcello cannot get his Viktoria. But even without further study of the lyrics one realizes soon that only Padre Martin knows what is behind a "hallelujah". And maybe Mr. Kaizer himself. And only he can save us... (But to understand that, it is indespensible seeing Kaizers Orchestra live. But that is indespensible anyway!)

A lot of influences for Kaizers Orchestra's music come from Tom Waits. The first lyrics are strongly influenced by the movie "Underground" by Emir Kusturica. But Kaizers Orchestra make something new and particular out of these elements and thus create their own fascination. And their own universe! By now, there is even a Kaizers musical, and probably it won't take long until they start making a movie...

A nice overview about the origins of Kaizers Orchestra can be found here on the official Webpage - in Norwegian, of course... =;-) A nice summary in German and English was composed by www.kaizers.de. So here is only a brief glimpse: So the band started in 2000 already - quite a while ago! 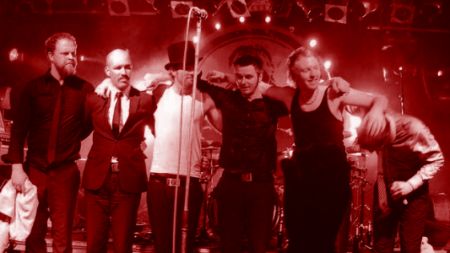 On the pump organ, all the way from Transylvania -
The one and only:
Mr. Two Hundred and Fifty Percent -
Mr. Helge "Omen" Kaizer!

His name is "The Jackal" - but some people may call him "Kaizer":
Mr. Janove Kaizer!
Say Hallelujah!