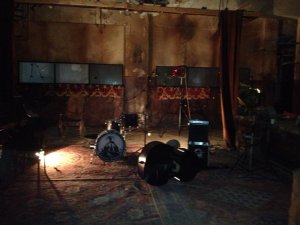 Poland - a land in Europe where there are almost as "many" Kaizers Orchestra fans as planets in our galaxy, I guess. But they exist nevertheless. I could be a good example of that. Kaizers Orchestra has never played a concert in Poland, so I was very happy to find out that the band scheduled one show in Prague, which is not so far away from my hometown (I live in the south of Poland). Of course I went there, and as I was standing three metres from the stage, I thought to myself - "It isn't possible to get any closer." Ah, if only I knew how wrong I was back then ... :-)

Long live Bartosz, a friend of mine who sent me the song "Kavaler" when I asked him about his music taste. At this point, in 2009, my adventure with Kaizers Orchestra began. Long live Igor, the director of "The Accidental Rockstar". Long live Facebook, because this is where I saw the information that the crew is coming to Poland. And long live Susi, because she accidentally informed me that the crew was looking for some Polish fans as extras for their film. 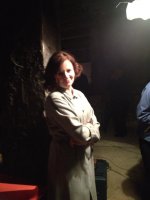 And so, I went to Warsaw by train. It was more than 300 km but I didn't care. There are things which are simply worth it. I was told that, during the film shooting, we should play "ourselves" - fans. I thought "It couldn't be any simpler!". We were supposed to be at the film studio in Warsaw by 9 a.m., because at that time, there was a bus out to Konstancin organized by the film crew. That was the second shooting day; unfortunately we weren't meant to take part in the first day. I went to Warsaw with my cousin. I had introduced her to the Kaizers world a couple of days before. -"From the hostel to the film studio ... hmm, it shouldn't take long, so let's walk!"- I proclaimed and we started our walk with a small umbrella (in the pouring rain) and with a map of Warsaw in one hand. The walk turned into a sprint after a while, because my topography sense wasn't as perfect as I thought. 15 minutes late, but ufff ... there we were at the bus stop. As I said in the beginning, there aren't many Kaizers Orchestra fans in Poland, so I was not surprised to see that except my cousin and me there were only two other real fans. Regina, Adela, Klementyna (ach! such a Kaizer-like name!) and Marta. On the bus, there were some extras and people from the crew, too. So, off we went! 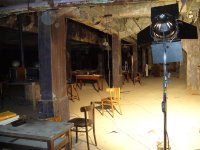 After half an hour, I could see an old factory where there was a lot of only rubble and ruins. -"Oh, it cannot be more Kaizer-like" - I thought, and in the meantime I realized that I was right. When I entered the factory, I felt as if I had crossed a magic border. Through the smoke, which was everywhere, I could see the world which the guys created in their songs. I cannot find the right words for that, but in my opinion the refrain of "Mr. Kaizer, hans Constanze og meg" describes it perfectly:

I've included some photos, so that you can imagine what it was like. :-) 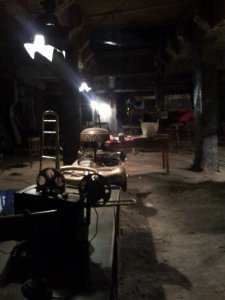 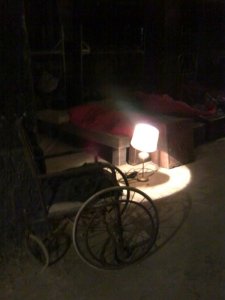 On the bus, I found out that only Janove and Helge would be on the set that day, but I was very excited anyway. It was before 10 a.m. when we arrived, but the scenes with our roles were scheduled for about 2.30 p.m. What were we doing then? Oh yes, we were made up and they made us look like from the 40s. My (and not only my) first visit to a make-up-room was an amazing experience. (You can see in the photos how we looked like.) I was the last one out of the four true Kaizers fans to be made up, which is why I had the time to get to know all the extras meanwhile. It was a plain job for them; they play in a film every day, so they didn't know much about the band. When they heard that there are some fans on the set, they began to ask me about everything, so that I felt like "Regina the wise". :-) Who are they? Where are they exactly from? What kind of music do they play? Are they as popular as I heard? Hey, I am Sonny, who is he? And I am Constanze! And I am Victoria! So, there was really a lot to talk about, and everyone was very enthusiastic about the Kaizers world. They were all really kind to us, and we felt like "accidental film stars" - there were people who wanted to take a photo with us because, as they said, we looked nice in the clothes. :-) 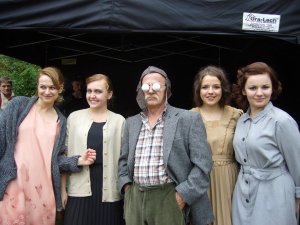 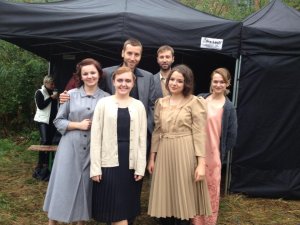 The moment arrived when we were called out on the set. Everyone had something different to do. I was supposed to dance - with Vincent! (Greetings to Michał who played Vincent. :-)) The only problem was that there was no music and we had to improvise. (After four replays, I realized that I should work out more. :-D) My cousin had to bicycle, the girls were asked to simply go past with bows ... We were just extras, so we didn't play big roles, but it was a real challenge for me. I was trying to remember when I danced last time (ok, the wedding three weeks ago doesn't count - there was so much vodka that no one would have noticed whether your dance was good or not. ;-)) But - to play in one scene with Janove and Helge - it's another thing. I wish such an experience to everyone. 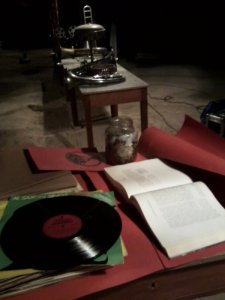 The scene was done after a few replays, and it was time for a lunch break. I was wondering all the time how I could get to speak a little to my Kaizers, because when I was finally free they were not around, and when they were free I was not ... And so, in the end, Janove was gone ... :-D I will never forgive myself! Fortunately one of us, namely Marta, managed to take a picture with him. My aim was at that point to speak with Helge at least, and I managed to do it in the end, but I will write about that later. After the lunch break, we were a little bit sad (Janove was not there anymore), but we were called on the set again, this time by Igor, the director. We were supposed to play in a record factory. We did it so well that we got applause from the crew! What a marvelous feeling!

After this scene, there were a few more scenes where we did not take part, and the whole day came to the end. We had only one thought - "Helge - where is he and when can we speak with him". We went to the dressing-room trailer and there he was - our bus was supposed to go to Warsaw in five minutes, so that was our last chance. It wasn't important for us that Helge was being made up looking like an old man and that we might disturb the ladies who were working on his outfit - he had to find five minutes for us. And he did it with pleasure, by the way. :-) After a short conversation and his words that he hoped to come back after the break, we had to say goodbye and went back to Warsaw. 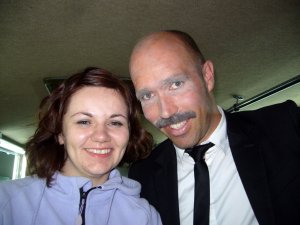 I can tell you that this day was one of the best in my life. The dreams which at a glance cannot come true became reality within one moment. I wish all the Kaizers fans days like the one I was granted.

Mr. Kaizer save you!